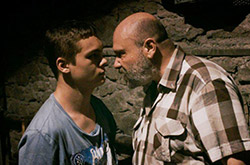 A 14-year-old boy, Gaza, lives on the Aegean coast of Turkey. Together with his dominant father, he helps smuggle refugees from war-torn countries to Europe, giving them temporary lodgings and scant food until they attempt the crossing. Gaza dreams of escaping this life, but can't help being drawn into a dark world of immorality, exploitation and human suffering. Can you avoid becoming a monster when you've been raised by one?

"More" is the gripping story of a boy that gets to grow up in a world where there's no room for innocence.

Arif Onur Saylak was born in Ankara but raised in Kusadasi (Aydin), Turkey. Having developed keen interest in drama and theatre, he started acting, directing and, writing plays. He then, went on to become one of the most known faces in Turkey as an actor. He won two best actor awards for his outstanding acting in Ozcan Alper's Sonbahar/The Autumn, the best film of 2008 AltinKoza Film Festival. He is acting in a famous TV series "Gonulcelen/Heart Stealer" on Kanal/Channel D since 2010.