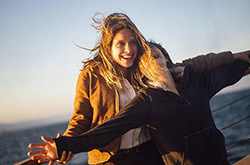 Djam, a young Greek woman, is sent to Istanbul by her uncle Kakourgos, a former sailor and passionate fan of Rebetiko, on a mission to find a rare engine part for their boat. There she meets Avril, 19, who came from France to volunteer with refugees, ran out of money, and knows no one in Turkey. Generous, sassy, unpredictable and free, Djam takes Avril under her wing on the way to Mytilene—a journey made of music, encounters, sharing and hope.

French director Tony Gatlif is something of a specialist in odysseys - notably in his epic 1993 docu-musical LatchoDrom, about the historic journeys of Gypsy peoples across India, Europe and North Africa. It was applauded as the "Most genuine film of the year" in Cahiers du Cinema. Gatlif brought the world of the author J. M. G. Le Clézio to the screen in much appreciated Mondo (1994).His 2004 film Exils, won him the Best Director Award at the 2004 Cannes Film Festival. His recent films Transylvania(2006) and Geronimo (2014) have also premiered at Cannes.