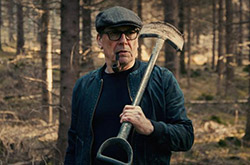 Euthanizer is a violent Finnish summer noir. It tells a story of VeijoHaukka, a 50-year-old mechanic, whose second job is to put sick pets to sleep. Petri Kettu has a problem with his dog. He pays Veijo to do the job. The only problem is that Veijo doesn’t kill healthy dogs. Petri brags to everybody how he has killed the dog by himself. But a lie never lives to be old – the dog is happy and very much alive. Petri gets furious. He has paid for the killing and he won’t be happy until the dog is dead. He has to get his honor back.

Teemu Nikki was born in Sysmä, Finland. He has directed numerous shorts, music videos, and commercials, and made his feature debut with Simo Times Three (2012), followed up by Lovemilla (2015), based on the popular Finnish TV dramedy of the same name, of which he has directed number of episodes.The Euthanizer (2017) is his latest film.