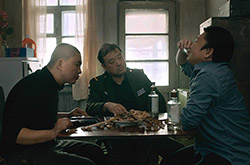 Free and Easy is sneaky and funny look at petty criminals in a small town in northern China. An old industrial city in northwest China, now deserted and covered in snow, is the picturesque backdrop of this absurd history. A soap seller arrives there, a crime happens, and from that moment on, they begin to appear absurd and strange characters who face each other with tragicomic results. In China, nothing can be said directly against the Government and, its policies. What may seem to be a somewhat random film about con-men in an impoverished city is, at its heart, an eloquent and important film. It is a silent scream for revolution and change set against the beautiful cinematic landscape of China.

Geng Jun was born in 1976 in Heilongjiang Province, China. He has directed and written many films including Hawthorn (2002), Diary in Bulk (2003), Barbecue (2004 Festival of 3 Continents, 2005 International Film Festival Rotterdam), Youth (2009 Rome International Film Festival), and The Hammer and Sickle are Sleeping (2013 Taipei Golden Horse Film Festival best short film winner). He also directed Poetry and Disease (2011). Geng Jun is an expert in using of off-screen space and has a predilection for symmetrical compositions.