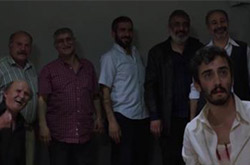 What happens when Lady Luck shines upon you but laughs and, runs away? Nobody knows this better than Mahmut – a naive struggling actor. He get a small role in a mediocre film. Somehow, he impresses the cast and crew and is now the subject of bullying from lead actor, who gets jealous!

In interesting turn of events, he hits someone and, police capture him. Next day, he realises that he is a hero as he has hit a serial killer! Coming back on movie sets, he is more in demand and, producers want to change his contract to make his character a good one! Just when it seems like everything is working out great; the real killer gets announced on newspapers. Mahmut is devastated. Now everyone sees Mahmut as a charlatan, but someone who is lying to be famous.

Muharrem Özabatwas born in Adana, 1950. After elementary school, he entered Beylerbeyi Naval School by exam. He was arrested and fired from the army for political reasons during 12th March Military Rule period. He was released by the 1974 General Amnesty. After working for newspapers, he started working as director’s assistant in 1980. He worked as director’s assistant, second director and director in numerous movies and television series.