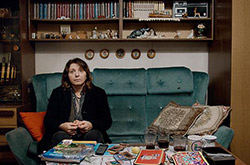 Mrs. J, a former administrative clerk, decides to complete all her obligations: wash a sink full of dishes, go to the store, dig up an old family pistol.Her late husband's pistol. She is determined to kill herself with that gun on the anniversary of her husband's death. In a week’s time.

Mrs. J decides to make peace with her pregnant older daughter Ana; to visit for the first time the hypermarket where Ana works; to make Ana's boyfriend understand what does it mean to be a man in the house.

Mrs. J decides to collect her severance pay from the bankrupt factory she spent half her life working in; to collect her life insurance, and to correct a typo in her name on her birth certificate.

She is prepared to finish all private and administrative works so that she may commit suicide in the way she wants. But to start doing all that she needs just one thing - a certificate about her employment over the past 20 years. In a country which is going through social transition, this will be highly complicated. Because living in transition is complicated. And dying is even more complicated.

Born in Belgrade in 1977, Bojan Vuletic studied film and television directing at the Faculty of Dramatic Arts in Belgrade. His feature film debut Practical Guide to Belgrade with Singing and Crying premiered at the Karlovy Vary International Film Festival and went on to win several awards. He collaborated as a co-writer with Stefan Arsenijević on the portmanteau film Lost and Found, which screened in the Berlinale Forum section in 2005, and on Love and Other Crimes which screened in the Panorama in 2008. His recent film Requiem for Mrs. J is Serbia's official entry to Oscars.