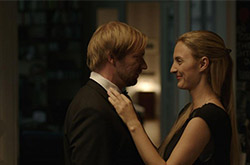 Have you ever played in a band? It's like a second family with whose members you wish for happiness and you are experiencing unexpected adventures. Just like a family, again and again at one table, members of the quartet of so-called contemporary music always meet each other at concert. Somewhat heterogeneous fours, headed by a solid-looking, Robert , his partner; attractive cellist Simonu, an extrovert joker Tomáš and historian Funés. We explore their life and, journey as they go through a series of humorous situations, but also misunderstandings. The main heroes are constantly embarrassed and are slightly bizarre, until finally one unplanned party brings a certain catharsis and joy and a delightful feeling of happiness.

Miroslav Krobot was born on November 12, 1951 in Sumperk, Czechoslovakia. He is a well known television and, film personality in Czech entertainment industry. He has acted in many television series and, films. As a writer and director, he is known for his debut feature Nowhere in Moravia (2015) and, The Quartet (2017).