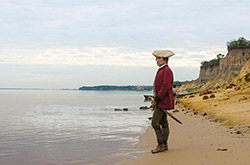 Zama, an officer of the Spanish Crown born in South America, waits for a letter from the King granting him a transfer from the town in which he is stagnating, to a better place.

His situation is delicate. He must ensure that nothing overshadows his transfer. He is forced to accept submissively every task entrusted to him by successive Governors who come and go as he stays behind. The years go by and the letter from the King never arrives. When Zama notices everything is lost, he joins a party of soldiers that go after a dangerous bandit.

Based on the novel by Antonio Di Benedetto written in 1956.

Born in Argentina, filmmaker Lucrecia Martel has positioned her work in the international film community. ZAMA (2017) is her fourth feature film after writing and directing LA MUJER SIN CABEZA (2008, The Headless Woman), LA NIÑA SANTA (2004, The Holy Girl) and LA CIÉNAGA (2001, The Swamp). Her films have been acclaimed at the most important film festivals: Cannes, Berlin, Venice, Toronto, New York, Sundance and Rotterdam, amongst others. Retrospectives of her work have been widely exhibited in film festivals and prestigious institutions such as Harvard, Berkeley or the London Tate Museum. She has taken part in the official juries of Berlin, Cannes, Venice, Sundance and Rotterdam, and has dictated master classes around the world.