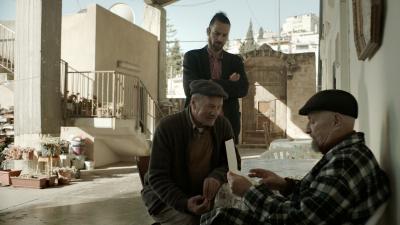 Abu Shadi is a divorced father and a school teacher in his mid-60s living in Nazareth. After his daughter’s wedding in one month he will be living alone. Shadi, his architect son, arrives from Rome after years abroad to help his father in hand delivering the wedding invitations as per local Palestinian custom. As the estranged pair spends the day together, the tense details of their relationship come to a head challenging their fragile and very different lives.

Palestinian filmmaker Annemarie Jacir has been working in independent film since 1994 and has written, directed and produced a number of short films including A post Oslo history (1998), The satellite shooters (2001) and Like twenty impossibles (2003). She works as a freelance editor and cinematographer and also teaches. Salt of this sea is her first feature film. Jacir lives in Jordan and is currently writing a feature, When I saw you.