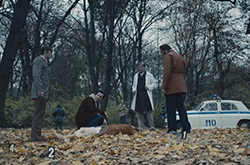 Janusz, a young detective becomes the head of a police unit focused on catching a rampant female serial killer. When the alleged perpetrator is caught, Janusz experiences a moment of fame and gets into his bosses good graces. And he will do everything not to lose it, even if it means that the wrong man will be convicted. I’m a Killer is a psychological thriller inspired by true events in Poland in the early 1970s.

Maciej Pieprzyca, director & scriptwriter - born in 1964 in Katowice (Poland). He debuted in 2008 with the film Splinters. In 2013 he directed Life Feels Good – one of the most successful Polish films in recent years, awarded at many international film festivals (Silver Hugo and Audience Choice Award at the Chicago IFF; Golden Space Needle at the Seattle IFF).