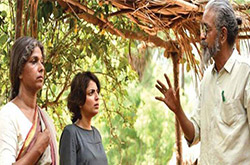 Jahanara the protagonist of the story, a post doctoral fellow in Berlin, returns to her native place in Kerala, in quest of her father who was absconding mysteriously. Her father, Hussain, a real humanist, was always in touch with her, before missing. She complained to police, approached advocates for tracing him. At last she comes to the realisation that she is the only person remaining on the earth who is in need of her father in flesh and blood. So she, with Mahesh, a friend, a media man, starts her journey to the unseen webs of the world. The only tools remaining with her, is the names of certain characters, repeatedly used by Hussain in the e-mail Communications between her and him.