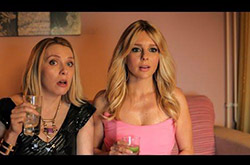 When aless talented, but very attractive writer Brigitte arrives with a bad manuscript at publishing house, the brothers Marc and Boudewijn, directors of a distressed family publishing house, immediately see possibilities. Creating a publicity gimmick, they let her change roles with the stuttering author of a literary masterpiece. The trick works; the book becomes a mega-success both artistically and commercially, but the initial agreement between all parties turns into a bitter battle for recognition.

Joram Lürsen is a Dutch film and television director. He graduated from the Netherlands Film and Television Academy in Amsterdam in 1990 with his film De Finales (The Finals). Lürsen directed several TV series for Dutch television: Vuurzee (2005), Baantjer (1995), Flodder (1993) and many more. He directed the family film In Orange (2004), which received international awards at film festivals in Hamburg, Esfahan, Kristiansand, Los Angeles, Poznań, and Rimouski.