Women of The Weeping River

Women of The Weeping River 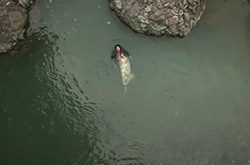 Two clans on either side of a river have a visceral hatred for each other. The conflict turns ugly; everyone is on edge and going out means risking your life. The film depicts the land disputes of two families whose hatred and resentment of each other is passed down from generation to generation.

Homage to women who, despite losing loved ones, do everything they can to preserve the family unit, this stunning film is the story of two women, in a remote Muslim community, who confront an escalating blood feud and reach deep into themselves in hopes to undo the feud stretching back generations. It highlights one of the many forgotten conflicts throughout the world.

Sheron R. Dayoc is a Mindanaon filmmaker and a visual artist. His 2008 documentary, A Weaver’s Talewon him a Certificate of Creative Excellence from the U.S. International Film and Video Festival 2010. Halaw (Ways of the Sea) is his first feature film which won Best Film, Best Director, Best Actor, and Best Editing at Cinemalaya Film Festival and won the Special Mention, NETPAC at the Berlin Film Festival, It has competed at more than thirty festivals all over the world.