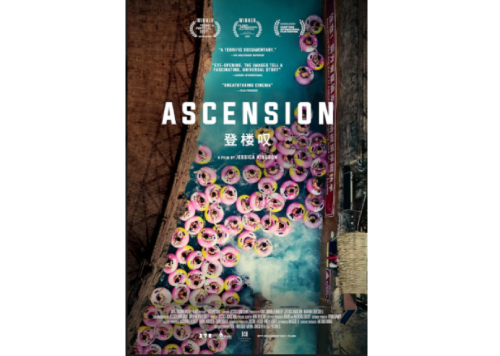 New York-based Jessica Kingdon is a director/producer named one of “25 New Faces of Independent Film” by Filmmaker Magazine and selected for the 2020 DOC NYC “40 Under 40” list. Her award-winning short Commodity City (2017) is an observational documentary about the world’s largest wholesale mall in Yiwu, China. It was shortlisted for a Cinema Eye Honour and has played at over 50 film festivals including Rotterdam, True/False and Sheffield. She co-directed the short It's Coming! (2020), which is currently playing festivals, and Routine Island (2019), which is included in The Eyeslicer Season 2. Her producer credits include Tania Cypriano’s Born To Be, Ian Bell’s 808: How We Respond, Nathan Truesdell’s The Water Slide, and Johnny Ma’s Old Stone.

Ascension is an impressionistic portrait of China’s industrial supply chain that reveals the country’s growing class divide through staggering observations of labor, consumerism and wealth. The documentary portrays capitalism in China across the levels of its operation, from the crudest mine to the most rarefied forms of leisure. Accordingly, the film is structured in three parts, ascending through the levels of the capitalist structure: workers running factory production, the middle-class training for and selling to aspirational consumers, and the elites revelling in a new level of hedonistic enjoyment. In traveling up the rungs of China’s social ladder, we see how each level supports and makes possible the next while recognizing the contemporary "Chinese Dream" remains an elusive fantasy for most.