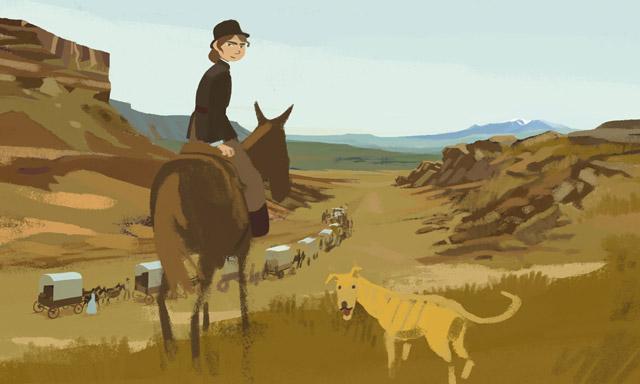 Rémi Chayé discovered the world of animation by chance while working as an illustrator. In 2003, he enrolled at La Poudrière animation school, where he made three short films. He went on to work as a storyboard artist and/or assistant director on a number of films, including Brendan and the Secret of Kells (Oscar nominee for Best Animated Feature), The Painting (César Award for Best Animated Film), and Eleanor’s Secret (Special Mention at Annecy). Long Way North (Audience Award at Annecy), for which he was also graphic designer, was his debut feature film. His latest animation feature Calamity, won the Cristal Award for Best Feature Film at Annecy.

It’s 1863 and 12-year-old Martha Jane and her family are headed West across the United States in search of a better life. After her father is hurt in a serious accident, she takes charge of her siblings and learns to drive the family wagon. Utterly practical and bold, Martha Jane trades her constricting skirts for the ease of boys’ breeches and never looks back. Her unconventional style and brazenness don’t sit well with the pioneer community, and when the leader of the convoy wrongly accuses her of theft, she must run away to find proof of her innocence. In the Wild, she discovers herself and a world which shapes her into the mythical and mysterious Calamity Jane.