The Making of Mahatma

The Making of Mahatma 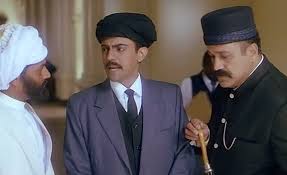 Shyam Benegal, a director who has carved a niche for himself in Indian cinema. Initially, he started off in the advertising industry before moving on to movies. He made his directorial debut with his film Ankur in 1974. He is known for his quartet of movies Ankur (1974), Nishant (1975), Manthan (1976), and Bhumika (1977). In recognition of his contribution to Indian cinema, he was awarded the Padma Shri in 1976 and the Padma Bhushan in 1991. Benegal was awarded the highest award in Indian cinema, the Dadasaheb Phalke Award for the year 2005.

Biopic of Mahatma Gandhi, focusing on his early years in South Africa as a young lawyer and his growing political activism. Mohandas Karamchand Gandhi was invited to South Africa in 1893 to settle a case for a wealthy Indian settled there. He expected to return in a few months, but instead got involved in the freedom movement, and eventually stayed for 21 years. The film recounts the journey of simple man, from a man to Mahatma (great soul).