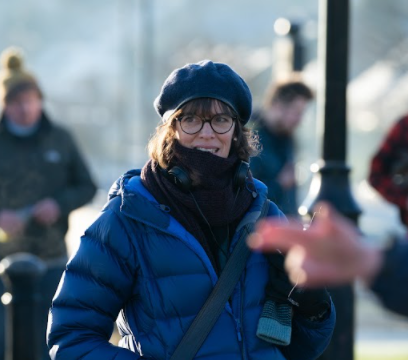 Clio Barnard’s first feature-length documentary, The Arbor, about playwright Andrea Dunbar, received huge critical success on its release in 2010 and numerous awards. Her second feature, The Selfish Giant, premiered as part of Cannes Director’s Fortnight 2013 where it won the Europa Cinema Label Award for Best European Film. It was nominated for a BAFTA for Outstanding British Film and for the Lux Prize in 2013. The film won Best Film at the 24th Stockholm IFF. Her third feature, Dark River, premiered at the 2017 Toronto IFF. Clio was awarded the inaugural Wellcome Trust and BFI Screenwriting Fellowship in association with Film4. Currently she is in production with the television adaptation of The Essex Serpent for Apple TV+.

Both lonely for different reasons, Ali and Ava meet through their shared affection for Sofia (six years old), the child of Ali’s Slovakian tenants, whom Ava teaches. Ali finds comfort in Ava’s warmth and kindness and Ava finds Ali’s complexity and humour irresistible. Over a lunar month, sparks fly and a deep connection begins to grow. However, the legacy of Ava’s past relationship and Ali’s emotional turmoil at the breakdown of his marriage begins to overshadow their newfound passion.