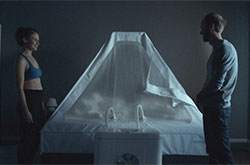 Adam Sedlák is a graduate of the Miroslav Ondříček Film Academy in Písek. He has made a number of shorts. His graduation film L. H. nominated for a Magnesia Prize for best student film. In 2015, he won first place from the Film Foundation for Best Unrealised Screenplay Of The Year for the film Domestik. Adam has received a nomination for a Czech Film Critics’ Prize for the miniseries Semester in the Best Newcomer and Beyond the Cinema categories. His feature debut, Domestik, was screened at competition section in the Karlovy Vary IFF.

Top cyclist Roman has had enough of serving as a domestique, a bicycle racer who sacrifices for the team. And since strenuous training and a strict regimen don’t lead to the type of performance he longs for, he sets up an oxygen tent at home. His obsession with having a sports career, however, renders him oblivious to his wife Šarlota’s desire to have a baby. A claustrophobic drama on the utter breakdown of a marriage almost suffocated by a machine that oxygenates the blood.