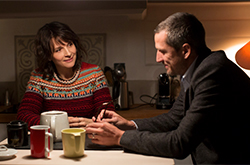 Olivier Assayas started out as a painter and graphic designer. He began making his own short films while he was also working as an editor of Cahiers du Cinema (1980-1985). Since his debut film, Désordre, won the Critic’s Week Prize at the Venice (1986) he has consistently delivered a rich and diverse body of work. With films like Cold Water (1994), Irma Vemp (1996), Something In The Air (2012), Clouds of Sils Maria (2014), and Personal Shopper (2016), he is a regular figure at worldwide festival circuit, including Cannes.

Alain, a successful Parisian publisher struggling to adapt to the digital revolution, has major doubts about the new manuscript of Léonard, one of his long-time authors - another work of auto-fiction recycling his love affair with a minor celebrity. Selena, Alain’s wife, a famous stage actress, is of the opposite opinion.