The Silence of Others

The Silence of Others 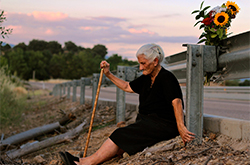 Almudena Carracedo and Robert Bahar have directed and produced their debut collaboration work, the Emmy-winning documentary Made in L.A. in 2007. Individually, both of them have produced and directed multiple documentaries that have won many awards across different film festivals. Almudena herself is a Guggenheim Fellow, a Creative Capital Fellow, a Sundance Time Warner Documentary Fellow, a United States Artists Fellow, and the recipient of an honorary doctorate from Illinois Wesleyan University. Robert is a Creative Capital Fellow, Sundance Documentary Fellow. Silence of Others is another multiple award winning documentary from them.

José Galante cannot and will not accept that his torturer is living only a few metres away from him, unpunished. Maria Martín is fighting to ensure that her mother’s bones are exhumed from a mass grave and buried next to her father’s remains. However, an amnesty law passed by a large majority in the Spanish parliament in 1977 not only guaranteed the release of all political prisoners, but also prohibited prosecution of any of the crimes committed by Franco’s dictatorship. For this reason, many atrocities remain unsolved to this day. Over a period of six years, the filmmakers spoke to victims, relatives and human rights lawyers about their long-standing struggle to obtain admissions of guilt and the abolition of the amnesty law. Their film also describes how a movement that began in someone’s kitchen eventually succeeded in gaining sufficient awareness for suppressed injustice that an international trial was held, during which arrest warrants were issued against no fewer than twenty former perpetrators of Franco’s regime.