From Where We've Fallen

From Where We've Fallen 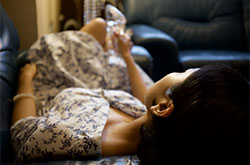 Wang Feifei directed the short films Xi Guan (2008), and Park (2010). A graduate in Screenwriting from Nanjing Art University, he has been director of operations and curator of the China Independent Film Festival since 2012 and programmer of the Xining First International Film Festival since 2015. He is also an online short fiction writer and university lecturer. From Where We Have Fallen is his debut feature film.

It's past midnight. Zhao goes down to smoke, leaving his drunken wife to murmur her erotic dream upstairs. Neighbour Lee jumps off the building in front of Zhao, and his suicide reveals a secret sex video taken by phone.
Sanqing falls in love with her tutor. She wants to strengthen her relationship with Professor Sun on a seaside trip, but finally realises her efforts are in vain. Hai Long is an old acquaintance of Sun. He tries to bring Sanqing and his client Wang together, giving Sanqing the opportunity to take revenge. In the dark tunnel on the island, Wang tells Sanqing a nightmare that reveals the whole story.