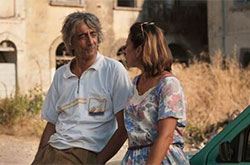 Pippo Mezzapesa is an Italian screenwriter and director. His short films include: Zinanà (2004), Settanta (2012), La giornata (2017). All of them have won multiple awards, and nominations in many prestigious festivals. Of his two documentaries, Pinuccio Lovero - Sogno Di Una Morte Di Mezza Estate premiered at the International Film Critics' Week at Venice, and Pinuccio Lovero - Yes I Can was selected for the Rome Film Festival's Prospettiva Italia section. His first feature film, Il Paese Delle Spose Infelici (Annalisa) (2011), screened in competition at the Rome Film Festival.

The last remaining inhabitant of Provvidenza, a village destroyed by an earthquake, Elia refuses to go along with the rest of the community, which has resettled in Nuova Provvidenza and put the past behind them. To Elia, his town is still alive, and thanks to the help of an old friend, Gesualdo, he strains to keep its memory alive as well. When the mayor orders him to abandon Provvidenza, Elia seems to be on the point of pulling up stakes, when he suddenly senses a strange presence. In fact, a young woman, Noor, is hiding in the rubble of the school, where Elia's wife had lost her life. Noor is on the run, and this chance encounter, coupled with Elia's own desire as keeper of the flame for Provvidenza, brings him up against a decision from which there is no going back.