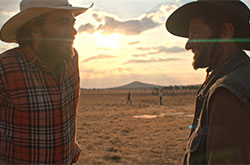 Carlos Reygadas is a Mexican filmmaker. He studied Law, and later specialised in armed conflict law and the use of force in London. After quitting the Mexican foreign service he made four short films in Belgium before filming Japón (2002), which was presented at the Cannes in 2002, where it received a special mention for the Camera d’or. Reygadas premiered his second film, Battle in Heaven (2005) in competition at Cannes. Also at Cannes he was awarded the jury prize in 2007 for Silent Light, and the Best Director award for Post Tenebras Lux (2012).

Juan and Ester live on their remote cattle ranch with their children. It's a very calm, private existence — one they both want to protect. The couple has until now enjoyed an open relationship but when Ester falls in love with an American horse trainer, Phil, who works in the area, she stops sharing details of her affair with Juan. He begins compulsively spying on his wife. The pain of not being in control forces him to question their relationship and he loses himself in turbid, jealous emotions.