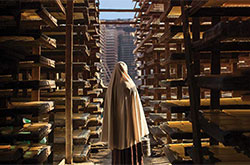 Fawzi Saleh is a. Egyptian filmmaker, and human rights activist. He graduated from the Cairo Film Institute (2009) in screenwriting. He contributed to many documentary films as a researcher, and co-writer and worked as an assistant director on various films, and TV shows. His short documentary Living Skin (2011) was screened in many international film festivals. His feature Poisonous Roses was premiered at Rotterdam (2018).

Twenty-eight-year-old Taheya works as a washroom cleaner, and lives with her 22-year-old brother Saqr in a tannery neighbourhood. While Saqr has plans to find a life outside his hellish job in one of the tanneries, Taheya hopes to keep him near her. Despite his love for his sister, Saqr does not bow to the pressure she puts on him and begins a relationship with Nahed, a young medical student. Despondent at the new distance between herself and her brother, Taheya turns to magic to bring Saqr back and threatens to kill Nahed. When Saqr returns, Taheya seems happy despite the coldness between them – but she cannot escape the idea that her brother still wants to abandon her.