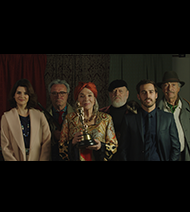 Juan Jose Campanella (born July 19, 1959) is an Argentinian film and television director. He has won 45 international awards for his work. He is best known for writing and directing The Secret in Their Eyes, which won the Academy Award for Best Foreign Language Picture. Campanella mostly works on films in his native Argentina, and on television projects in the United States, where he went to film school. He has worked on hit American TV shows like Law & Order: SVU, 30 Rock, House MD and Strangers with Candy.

A beautiful star from the cinema Golden Age, an actor in the twilight of his life, a witty scriptwriter and a cunning director live together in a mansion where they have created an unusual environment. The arrival of a young couple seeking to persuade the actress to sell the house, forces the other inhabitants to come together and conspire to prevent it.