Too Much Info Clouding Over My Head

Too Much Info Clouding Over My Head 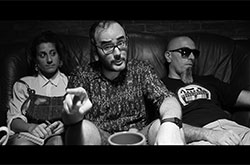 Vassilis Christofilakis is an actor, director, stand-up comedian and writer who grew up in Athens, Greece. He studied film in the UK and worked in Greek theatre as a director and playwright for several years. He has directed works of various writers such as Tennessee Williams, Fernando Arrabal, Alejandro Jodorowski, Steve Thompson and others. Too Much Info Clouding Over My Head, a black and white smart comedy, which is his acting and directorial debut, won 3 awards at Thessaloniki IFF.

After the failure of his previous film, Gay Nazi Cyborg Zombies in Love, Vasilis will do whatever it takes to earn money for his next film. Meanwhile, those around him will fill the young, anxious director with concerns, and he will barely be able to survive in this hilarious Greek comedy.