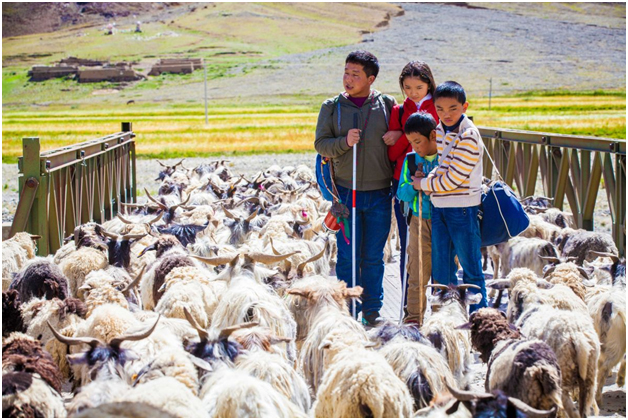 BALLAD from TIBET is a story about a group of Tibetan kids embarking on an odyssey, each for a different reason. Thupten, with one eye partially working and the other completely dysfunctional, wants to see the world before his life goes completely dark. Droma, a beautiful weaving girl, wants to prove to her granny that she is more than a weaver by getting into a TV show. Sonam, a blind masseur, is fed up with his boring job. Kalsang, the youngest of them, simply follows others because it sounds terribly fun. With the help of a nomad family, a fleet of bikers, and a TV producer, the band marches to the metropolitan of Shenzhen. Their goal is to sing for everyone through the TV network…

Driven by a desire to make a strong impact in film, Zhang Wei studied Directing at the Beijing Film Academy as well as Cinema Studies at the Chinese National Academy of Arts. In his film-making career, to date he has directed five features including BEIJING DREAM (2010) and SHADOW PUPPET SHOW OF ONE PERSON (2011), both of which received acclaim from critics. His third feature FACTORY BOSS (2014) won the Best Actor Award at the Montréal World Film Festival,theFajr Award for best original screenplay at the FajrInternational Film Festival, and has been shown at numerous festivals. His fourth feature DESTINY(2016) won the special merit at the Bangalore International Film Festival, and the Best Actress Award and the Best Actor Award at the New York SR Socially Relevant Film Festival. With a unique perspective, Zhang Wei's works are known for depicting the actual living conditions of marginalized groups in the Chinese society, and rendering reality as real as reality itself with a narrative of simplicity. A typical Zhang Wei film is recognizable by its innate humane touch, shedding light on overlooked issues of the society through the telling of what seems like stories of everyday people, provoking thoughts in the audience about emerging yet unnoticed problems during the rapid development of China.