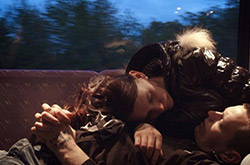 Belinda is 9. Not the easily intimidated. She loves life, she loves snow, ice to slide on, the children's home where she lives with her sister. Her sister whom she loves even more than the rest. The authorities part them. So the sisters run away, crossing forests at night to reunite.

Belinda is 15. Not the type to work in a shoe shop. She lives with her mother and is about to become godmother to Nicolas, her sister's son.

Belinda is 23. She lives with her father, Frantz. She still loves dresses, high-heeled shoes and wearing her hair in a chignon. But, more than anything, she loves Thierry, his blue eyes and his accent from the Vosges mountains. She is there to meet him when he is released from jail. They want to get married so that nothing will ever part them again. But...

Marie Dumora is a French director who films all her documentaries in the same area which spans only a few kilometres in eastern France. She thus creates a cinematic terrain where the characters of one film lead to the next. Her works have screened at numerous festivals and won various awards, including the Intangible Heritage Award at the Cinéma du Réel festival in Paris for La Place (2012). Her latest documentary Belinda (2017) screened as part of Berlinale Panorama.