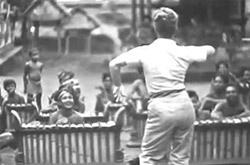 In 1932, experiencing a midlife crisis aggravated by the coming of the talkies, Chaplin decides not to return to Hollywood after his movie City Lights. Instead, with his brother Sydney, he "escapes" to Bali. The island seems to be a peace haven as he is virtually unknown there. Chaplin finds rejuvenation and inspiration in their dances, which he films extensively with the help of his brother. Most importantly, Bali helps him resolve his fear of sound, thus enabling him to embark on a new phase of filmmaking that will lead him to Modern Times, the first movie in which he does even better than speak - he sings! Yet, this moment of epiphany in Bali is not pure naivety on the part of Chaplin, as he also encounters the colonial world first hand and is able to perceive its dark side. It contributes to further his political awakening and reinforce his dislike of any form of domination.

Raphaël Millet is a French writer, producer and, director of cinema and television, as well as an organiser and programmer of photographic and cultural events.During 1996 to 2007, he worked with various government organisations promoting culture, cinema and, art, including France Télévisions. In 2007, he founded a production company called Nocturnes Productions. Under the company, he has directed feature documentaries such as Pierre Schoendoerffer, the Sentinel of Memory (2011), The Cinematographic Voyage of Gaston Méliès to Tahiti (2014), Gaston Méliès and his Wandering Star Film Company (2015) and,Chaplin in Bali (2017)