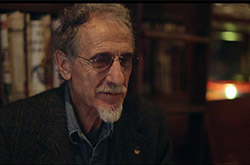 As an NYPD officer in the late 60s and early 70s, Frank Serpico blew the whistle on the corruption and payoffs running rampant in the department. He was shot in the face during a drug arrest, and most famously became the subject of Sidney Lumet’s classic film Serpico. Forty-plus years later, Serpico talks about his Southern Italian roots and upbringing, his time as an undercover officer, and his post-NYPD life in Europe and ultimately upstate New York. Adding their own recollections are his fellow officers, childhood friends, his West Side neighbours, and his admirers such as writer Luc Sante and actor John Turturro. It is a powerful portrait of an always-committed public servant who still walks the walk in his very own unique way.

Antonino D’Ambrosio is an Italian-American author, filmmaker, producer, and visual artist.He is the author of Let Fury Have the Hour: Joe Strummer, Punk and the Movement that Shook the World (2012) and A Heartbeat and a Guitar: Johnny Cash and the Making of Bitter Tears. (2009).D'Ambrosio has produced more than 15 documentaries, films, videos, and visual art pieces. His recent film includes No Free Lunch starring Lewis Black. He produced, wrote and, directed the documentary Let Fury Have the Hour. The film was an Official Selection of the 2012 Tribeca Film Festival.