Gabriel and The Mountain

Gabriel and The Mountain 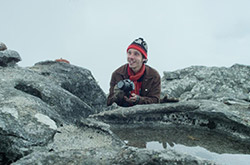 Before entering a prestigious American university, Gabriel Buchmann decided to travel the world for one year, his backpack full of dreams. After ten months on the road, he arrived in Kenya determined to discover the African continent. Until he reached the top of Mount Mulanje, Malawi, and his last destination.

Born in Rio de Janeiro, Fellipe Barbosa directed the short films La Muerteespequeña and Salt Kiss, selected at NYFF, Clermont-Ferrand, Guadalajara and Sundance. In 2008, he developed the screenplay of Casa Grande at the Sundance labs; the film premiered at Rotterdam's competition in 2014. Gabriel and the Mountain is his second fiction feature.