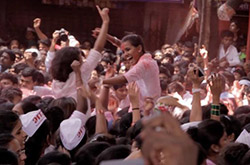 JUGAAD is a Canadian independent feature length documentary that explores and celebrates the enduring human spirit in Mumbai, India’s Promised Land. The word “jugaad” means creative problem solving. It’s the connective tissue of the city and is at the crux of survival in the world today.

Susannah Heath-Eves is a filmmaker based in Montreal and Mumbai. Prior to JUGAAD, she worked at EyeSteelFilm, where she was Line Producer and Co-Editor on two documentary projects: THE BLUE WATER PROJECT, a web series on freshwater conservation, in collaboration with CloudRaker; and THE FRUIT HUNTERS, directed by Yung Chang, a feature film and two-episode TV series for CBC's The Nature of Things, in collaboration with the National Film Board of Canada. Susannah has worked as a reporter and current affairs associate producer for Canada’s public broadcaster, CBC Radio and Television. She has a Masters in Broadcast Journalism and a BA in English Literature, both from Carleton University in Ottawa.