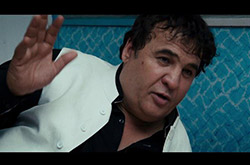 About a hundred kilometers away from Kabul, SalimShaheen, the most popular and prolific actor-director-producer in Afghanistan, comes to show some of his 110 films and to shoot the 111th in the process.

He has brought with him his regular troupe of actors, each more eccentric and out of control than the next. That trip is an opportunity for us to get to know Shaheen, a real movie buff who has been making Z movies tirelessly for more than thirty years in a country at war. Nothingwood is the story of a man who spends his life making his childhood dreams come true.

Sonia Kronlund is a director and actress, known for The Prince of Nothingwood (2017), Rai (1995) and Toutes les télés du monde (2005).
Sonia Kronlund holds a DEA in aesthetic philosophy from Paris I - La Sorbonne . A pupil at the Écolenormalesupérieure of Fontenay-Saint-Cloud , she is a graduate of modern lettersShe is the coordinator producer of Les Piedssurterre , a daily radio documentary broadcast
broadcast on France Culture since 2002 , where she aims to "try to listen without analyzing, to understand without comment, to open a small window on this real that escapes us or that always reaches us formatted. Listen to those whose comments are abundantly commented on, go to their land and stay there . "For the same station she also produced documents relating to her favorite countriesIran , Afghanistan and Japan .Sonia Kronlund has produced several documentary images for Arte as well as Nothingwood , a feature film shot in Afghanistan 2 , presented at the Directors' Fortnight , as part of the 2017 Cannes Film Festival.