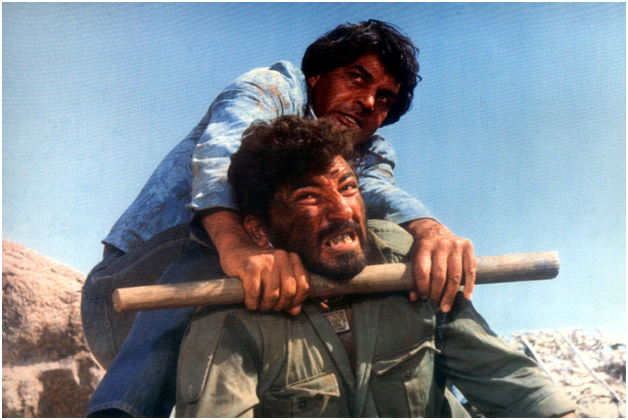 A retired police officer, Thakur Baldev Singh gets two convicts, Jai and Veeru, to capture Gabbar Singh, a bandit chief who has been terrorising the small village of Ramgarh. Gabbar had massacred Thakur's entire family and even had his arms cut off. Unable to take revenge himself, Thakur recruits Jai and Veeru, both small time crooks. Both agree to capture Gabbar Singh live and hand him over to Baldev Singh. However, things do not go as planned. Veeru falls for the local horse carriage driver Basanti; and Jai starts to have romantic feelings for Thakur's widowed daughter-in-law, Radha. To make matters worse, Gabbar has sworn to kill both Jai and Veeru, and holds Basanti as a hostage, to lure them to him. But Jai and Veeru plan the whole thing carefully and with their wit, that no bandit could outwit the two.

Ramesh Sippy is a stellar director and producer, who has been a part of the Hindi film industry for over fifty years. He started as an executive producer with Brahmachari and went on to direct a slew of very successful films such as Andaz, Seeta Aur Geeta, Shaan, Shakti, Sagar and the history making Sholay. He is a trustee on the board of MAMI, a board member of IIFA, President of the Producers Guild, Chairman of NFDC and FICCI Entertainment Committee Board Member.