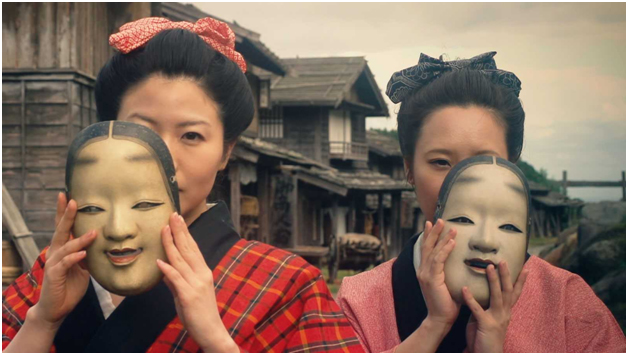 Ninko, a young, diligent Buddhist monk, has one serious problem: Women can’t seem to resist him. They pester him so much that he can’t even ask for alms in town. Since sexual indulgence is considered a sin, he blames himself for not being virtuous enough. One day, he runs into a masked woman in the forest who tries to seduce him. Running away from her, his problem only gets worse. Nearly driven mad, he escapes deep into the mountains to be alone. There he finds a corpse in a deserted village, victimized by a specter who seduces the spirits of men. A samurai claims that he can kill the specter, and Ninko follows him, hoping that he’ll rid him of his curse.

Norihiro Niwatsukino started making films while attending the Kyushu Institute of Design in Fukuoka. After graduating from the Graduate School of Design at Kyushu University in Fukuoka, Niwatsukino moved to Tokyo and started working as a freelance director and as a screenwriter. He has directed various video works includes live-action, music video, animation, etc. His short film Strawberry Jam(2010) was invited to various film festivals in Japan. Niwatsukino followed with his first animation series Onizushi. Suffering Of Ninko (2016) is his first feature film.