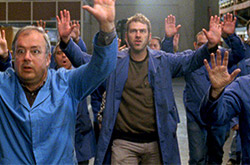 One night, a group of workers realizes that their administration has organized the stealing of machines from their factory. They soon understand that this is the first signal of a massive lay off.Most of them refuse to cooperate during the individual negotiations and they start to occupy their work place. So when the administration vanishes to their great surprise, they’re left with a half-empty factory... As the world around them collapses, new desires start to emerge.

Pedro Pinho studied Cinema in Lisbon and Paris. In 2008 heco-directed with Frederico Lobo the documentary feature .BAB SEBTA (Prize Marseille Esperance award at FID MARSEILLE’08,Best Film at DOCLISBOA and FORUM DOC BH (Brazil). In 2009, with five other film-makers, he founded the company TERRATREME, which in recent years has been playing a central role in producing and promoting new Portuguese directors. THE END OF THE WORLD (2013) is his first medium-length fiction film ad it was screened at the 63º BERLINALE, INDIELISBOA, and FESTIVAL DO RIO (It was nominated for the Portuguese Golden Globe Awards for Best Film and Best Photography at Caminhos Cinema Português‘14).In 2014 heco-directed with Luisa Homem the documentary ASCIDADES E AS TROCAS, shown at FID MARSEILLE, DOCLISBOA and THEART OF THE REAL (NY).Currently heworks as a director, writer and producer.THE NOTHING FACTORY is his first fiction feature.